See shirtlyletters.com for how to get a copy

This is a well written coherent account of what it must be like to have been born with a silver spoon, suffered the slings and things of outrageous fortune, fallen heavily, recognised one’s own plight and, with belief, compiled the many memories to chronicle a ‘you couldn’t make it up’ succession of extraordinary events. The fact that it is done with clarity and honesty makes it compelling reading.

The memoir starts off with the horrific ordeal of slipping through the mental health net, even as a voluntary patient, and reads at this stage rather like a verbatim account outlining the events after they had happened. The logical, well argued in hindsight, rant against widespread chemical coshing by the seemingly non-sensical overstretched unconcerned authorities and the Catch-22 patients can find themselves so easily sucked into make for disturbing reading.

Yet with perseverance, and some broad ideas about faith, the author survives and goes back in time to explain the rarified world of inherited wealth into which he was born. He reflects on his, often idyllic, privileged upbringing telling of fascinating ancestral anecdotes up to the point of his arrival within the strange family dynamic. His evocations of the lifestyle alongside the rigours of an elite private education are most illuminating as is his devastation on the, at the time, unexplained suicide of his mother.

Persistent bolter behaviour by his philandering father can’t have helped much in the feelings department neither can a complete lack of emotional attachment between father and son; the matter seems to have been emotionally swept under the carpet of respectability as was so often the behaviour in days gone by.

Suffering in silence yet conforming to the norm he continued indulging in pastimes and pleasures; playing the game, at that stage of the performance, was considered the important thing in life and playing hard was admirable. To be seen to rebel and yet retain class conventionalism was indeed a tricky balancing act. Mostly manageable but when wrong, disastrously so.

Despite the increasing personal knockdowns; some hugely unfairly financial, some marital, many self-inflicted due to his regular cannabis consumption, the prose is never delusional and doesn’t sentimentalise the sheer unfairness of the experiences. The pain is described as are the fun times and it is these which seem to keep him going throughout the tribulations by which he is beset.

Sections of the memoir alternate between diary accounts of his travels, his musical tastes and his descents into the depths of mental trauma. This pendulum-like progress (?) keeps up a steady momentum eventually enabling him to overcome his illnesses by seeking solace within worship. The need to communicate his experiences and assist those less fortunate is now very much uppermost within his aim and set firmly in his sights. More descriptive travels (interesting destinations, now alas, mostly unrecognisable from his adventurous era) follow as does a gradual understanding of why he perceives he was put on the planet.

It is by meeting the charismatic Jean Vanier several times, followed by Holy Land wilderness travels, that the dilemma of life is further questioned. As the personal considerations get more profound and less diary-like, so the accommodation, lists of names and food price criticisms decrease and the internal journey of personal faith increases.

This is a book with both a beginning and a contemplative end that unfolds unexpectedly. It is told throughout with an honesty and conviction that is unflinching. One can only hope that, with further undoubtedly difficult forthcoming trials and tribulations, the author now has the wisdom to depend on his faith and resilience. Not only to retain his sanity but find true happiness and contentment. Given the therapeutic value of ‘telling it like it is’. I have a feeling there are more stories to come.

‘A pal of fifty years’

A number of chapters of Jamie Summers’ autobiography were particularly touching. For me, his pained admissions on and into Springfield Hospital in South London, where I have worked, stand out, as well as his time at Eton and the loss of his mother to suicide at such a young age.

His story reminds us what many of us will have felt from time to time about how a wealth of physical resources does not protect us from a poverty of mental and emotional ones. Jamie’s story strikes me so, as a boy and a man he was handed blessings in one hand and lemons in the other, and left to find his own right way through a maze of mind and mental healthcare that was, too often, not caring enough.

Lemons indeed. This book is their process. Jamie adds the sugar of his writing style and charm to the acid singe of his suffering to make something special: homemade lemonade. 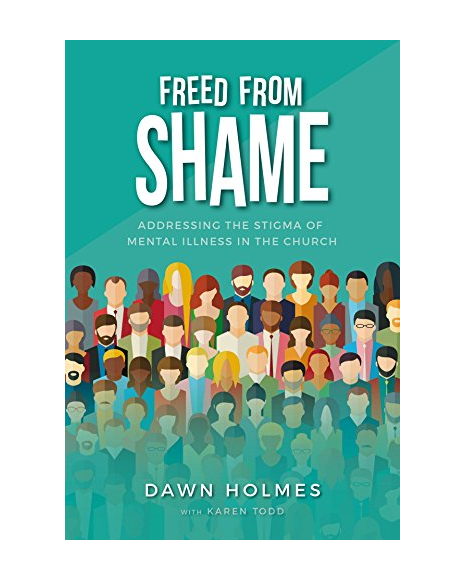 In the April issue of ‘Christianity’ there was a book review of ‘Freed from Shame’ which gave Dawn Holmes’ work the same 4 stars as Justin Welby’s latest. Its subject matter was of particular interest to us at Being Alongside / APCMH subtitled as it was: ‘Addressing the stigma of mental illness in the church’. So I found a copy through a large online bookshop although one can also order it directly through the book’s own micro-site  or read it as en e-book.

It arrived speedily in a blue paper bag with additional promotional material, a nice touch possibly made easier by the self-published nature of the book. Some of you will know that BA / APCMH has been working on preparing a leaflet to encourage churches and their congregations to do more for the mentally afflicted. Well, this book echoes the ideas expressed in our drafts and expands them. Dawn, with help from Karen Todd of Simplicate, has produced a book that is easy to read, only 100 pages long all laid out creatively and clearly. It is aimed at anyone interested in mental health issues in the Church be they leaders, people with problems, their friends and relatives.

It comprises three sections … Part I ‘Understanding mental health’ deals with all the diagnoses people are given. Part II ‘Being understood’ contains the real-life stories of nearly 20 sufferers and Part III ‘Equipping the church’ gives practical advice to churches on how to help. To be honest I found Part І a little dry but that’s just my personal perspective and probably the information there will educate the layman – when in Part II we learn that Michelle was diagnosed with ‘Emotionally Unstable Personality Disorder’ which used to be called ‘Borderline Personality Disorder’ I wonder if these labels really help anyone – are we not just people?

The testimonies in Part II derive from Dawn’s survey questions. Each one moved me. I’ll share a few with you now – Michelle says, “… I just want you to walk with me, like Jesus does in the poem ‘Footprints in the Sand’.” Peter says the most important advice is to “listen properly – look behind the mask that a person puts on to protect themselves.” Heather pleads, “… don’t judge me … be practical but patient but above all loving.” Deborah, whose daughter has had traumatic teenage years says, “I believe it’s time churches did more to support people struggling with mental illness. Don’t let more people suffer alone, get hurt or misunderstood – it’s time for a change.” Amen to that.

Dawn’s practical suggestions in Part III include setting up drop-ins, quiet zones, prayer spaces and befriending sufferers on to one. I particularly liked one of her bullet-point charts which mirrored the ethos of our little charity, but were all taken from comments in her survey.

All in all an excellent publication, written with empathy and love. As churches, we need to step up to the plate and end the stigma and shame says Dawn. May God reveal His heart to you as you read this book and bring His hope, grace and peace to all.